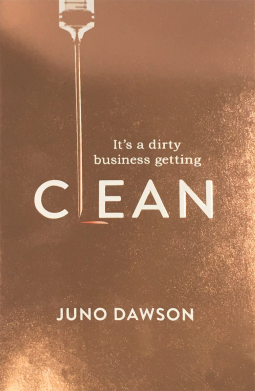 “It’s a dirty business getting Clean”

Wow. Imagine having an idea for a book about heroin addiction and recovery – but aimed at a YA audience. How do you make such a hard hitting subject appeal to teenagers in a way that isn’t massively over complicated and depressing but conversely isn’t so lighthearted that it minimises or God forbid glamourises the topic? That’s a pretty difficult balance so I’m pretty much in awe of Juno Dawson for getting it almost spot on with their new novel Clean *raises hands in praise*.

The story features Lexi Volkov, the spoilt child of billionaire Russian parents living the high life in London. But when your party hard lifestyle includes a toxic cocktail of booze, pills, coke and heroin it’s bound to catch up with you eventually – and when it does it’s really going to hurt. So when Lexi’s brother realises how far gone his sister is he packs her off to the best treatment facility available. As Lexi begins to sober up she realises how much of her life revolves around her addiction – so how can she be the same person if she’s clean?

I thoroughly enjoyed reading this novel. I loved how compelling the writing was (it really is excellently written) and how engrossed I quickly became in the storyline. Despite how many of the characters initially seemed to be shallow, vain and self absorbed I really liked how setting the majority of the book in a rehab facility allowed for a deep exploration into the reasons for their behaviour. I thought it was great that other types of addictions were written about (this must be one a very few number of YA books featuring a teenage sex addict) and I especially liked that one of the characters just happened to be trans, one was black, one was Islamic – but that they were fleshed out to be a three dimensional people with multi-faceted issues (not just token bits of piecemeal representation) that all fitted with the main storyline. This is diverse representation done well.

Initially I found it hard to like Lexi. Her spoilt, poor little rich girl act was especially irritating and I hated that she was beautiful, intelligent, massively privileged and still expected to live her destructive, hedonistic lifestyle regardless of the consequences. However, there was something compelling about her bravado and as the story progressed I began to understand that her life wasn’t as glamorous as it first appeared. As she became more self reflective, it was easy to see how her attitude was her security blanket and that underneath she was lonely, scared and surrounded by people who just wanted to use her. By the end of the book I was totally team Lexi ☺.I

I liked the way that the author didn’t say away from the realities of sobering up from drug addiction (at one point Lexi wakes up to find she’s shit the bed) and her resistance to any kind of help or support felt completely authentic. Her toxic relationship with her boyfriend back in London also felt very realistic and although I wasn’t too keen on the whole symbolic act of finding a young stallion and breaking it in (literally – the couple who run the rehab centre keep horses) I did at least like the horse as a character and found he gave a bit of light relief. I liked that Juno Dawson included some characters who were too far gone to be saved and I thought that she brilliantly illustrated the complex emotional/mental health problems that go hand in hand with addictive behaviour.

However, I did have a few reservations about the novel. There’s a relationship featuring the aforementioned sex addict that made me wonder “is this minimising the issue?” and there was a distinct lack of medical complications resulting from addiction (anything from depression and anxiety to unwanted pregnancy, STDs, HIV etc.) I think that part of the reason that the characters mostly seemed to get off  lightly in relation to further complications was their monied backgrounds – if they had been ordinary people they would have needed to resort to theft/violence/prostitution to keep their habits going.

I wasn’t sure about the ending (I know it’s YA but everything seemed a bit too perfect) although I appreciated the realism of Lexi’s struggle when she left the facility.

Overall I really enjoyed Clean. I thought that Dawson nailed the diverse representation angle, the characters were totally believable and although parts of it were a bit trite there was enough shocking content to not glamorize addiction. On a personal note, I have a friend who has just left rehab so the book really struck a chord with me. Despite it being a work of fiction, it’s honestly made me far more aware of how rehab works and what support might be necessary going forwards. Fingers crossed ☺.

Shocking but warm, annoying but relatable, funny but sad; everyone needs their fix of Clean.