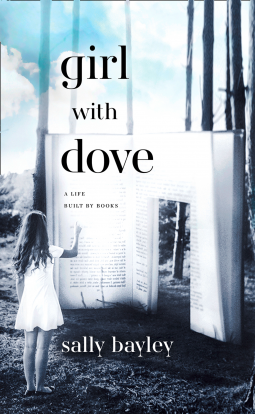 Similar to: A less extreme version of anything by William S.Burroughs

Could be enjoyed by: Fans of Victorian literature

You know when a book is trying too hard to be clever and innovative? Yeah. That’s exactly how I found Girl With Dove. I’m sure lots of people will praise the novel for it’s highly original style, but it just wasn’t for me. Frankly I found the whole thing confusing.

Girl With Dove is the autobiographical (I think – it’s hard to tell) novel of Sally Bayley’s childhood. She seemed to grow up in some kind of large extended family home/commune (again, hard to tell) with some pretty disinterested/depressed adults and (possibly) quite a lot of siblings, although they’re not really mentioned. She seeks refuge from the chaos at home in literature, specifically Agatha Christie, Bronte and Dickins and uses characters from these works to explore what is going on around her.

The short version of this explanation is – I don’t really know what this book is about. When I say that Sally Bayley uses fictional characters to explore her life, she quite literally quotes them, daydreams about them and uses them as a kind of shield to view her life from a safer distance. As you can imagine, this gets incredibly complicated. It doesn’t help that there aren’t that many big events that occur for the first 75% of the book, so it’s hard to work out the timeline and to separate fact from fiction (literally). It sounds like an upsetting story of neglect, but so many of the details are lost through the odd narrative style that I don’t really know what to think.

It’s interesting that Sally Bayley chooses three female characters from literature to help her to try to make sense of her life. She relies on Miss Marple, Jane Eyre and Betsey Trotwood – three strong, sensible, stable  women who act as a weird kind of moral compass. I would guess that these characters appealed to her because she so obviously was missing a decent female role model (and also a decent male role model, but growing up in a house with no adult males this may not have even occurred to her). Unfortunately, filtering your life through fictional characters made me feel very removed from the storyline so I really struggled to emotionally connect with the book.

It didn’t help that I’m not familiar with any of the characters that she chose to feature so heavily in the story. Perhaps if I had been I would have found the novel easier to read, but without that knowledge I frequently found myself flicking backwards and forwards, trying to work out what on earth was going on (not easy on a Kindle).

I don’t doubt that Sally Bayley has fantastic literary skilks, but unfortunately the narrative was so fractured that I feel like she tried a little bit too hard to be innovative and ended up with a confusing mess. I’m going to guess that the jilted narrative flow was done on purpose to reflect the turbulent childhood that she experienced, but I needed at least a few clearly defined events to hang the rest of the story from. I think that in the last quarter of the book, the storyline does become clearer and I enjoyed that far more than the preceding three quarters, but it just wasn’t enough.

Overall, I loved the idea of using books as an escape from real life (who hasn’t done that?) but I hated the execution. I read a book years ago called “A Fucked Up Life in Books” which used the same idea but in my opinion did it far, far better. As I said before, some people will love Girl With Dove, but it just wasn’t for me.

Rating: Two WTF’s out of five.

Confusing, difficult and overly ambitious, Girl With Dove makes literally no sense. I don’t even know what the title refers to. Best avoided, in my opinion.

10 thoughts on “Review: Girl With Dove by Sally Bayley”