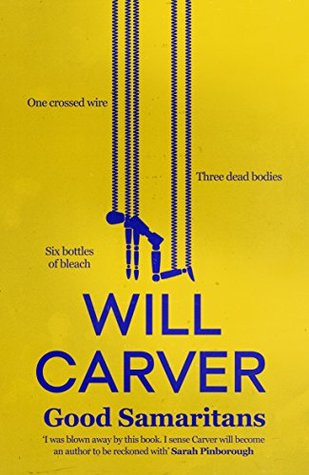 Similar to: Behind Her Eyes by Sarah Pinborough

Could be enjoyed by: Fans of dark and twisted thrillers

Seth is an insomniac. Sure, he calls people late at night whilst his wife Maeve is asleep upstairs but apart from that he’s Fine. Maeve drinks a bit too much (it’s the stress of the job) but she’s basically Fine. Their marriage is Fine. They’re pretty average, really.

Ant is Fine too. He has OCD but has plenty of established coping mechanisms. He volunteers for the Samaritans, helping the people who are Not Fine. Ant isn’t one of those people.

But when she reaches out to the Samaritans, she gets a crossed telephone wire and ends up talking to Seth instead of Ant. Hadley doesn’t know that though. Hadley thinks that she’s getting professional help. That everything is going to be Fine.

Spoiler alert: everything is most decidedly Not Fine. At all.

What follows is a complex, tangled plot full of lies, sex and death – all of the good stuff. The characters are all messed up in their own unique ways which makes four somewhat unreliable narrators. There’s only one trustworthy voice – Detective Sergeant Pace – but he’s so woefully behind the action that he serves more as an anchor point than anything else. Good job too, because without him you’d be forgiven for assuming that the plot was some kind of fever dream.

The storyline is utterly addictive. There were red herrings and plot twists left, right and centre and although the book is graphic, violent and dark it never felt gratuitous – even the sex felt authentic. There’s an odd sense of humour running through the narrative that kept even the murder-y bits light and meant that I got wrapped up in the plot without getting bogged down by the difficult content. This is definitely the kind of book that you try to read under your desk at work – just as you think you’ve worked things out, along comes another curveball!

The characterisation in the book really was excellent. Again, having four flawed narrators could have become very confusing but each had such a distinct voice that it was easy to follow what was going on. I loved how the female characters had their own agency and thought that they were both very well written. All of the characters were complex individuals with their own good and bad points – and it’s testament to the author that I ended up rooting for the bad guy, even though they were horribly psychopathic.

The only thing I can criticise Good Samaritans for is one tiny little word that kept popping up – Warwickshire. You see, I’m from Coventry – which coincidentally is where one of the characters lives. From several references throughout the text, Coventry and Warwickshire were used to denote broadly the same location which would have been fine if Coventry was in Warwickshire – but it isn’t. So every time there was a reference to location, it grated on me a bit. (Sorry Will).

Minor issues aside though, Good Samaritans is a fantastic book that really keeps you on your toes. I loved the overall tone, the pace, the dark humour and the sheer complexity of the plot. Highly recommended!

Rating: Four “Lock the door, we live near some weird people” out of five

8 thoughts on “Review: Good Samaritans by Will Carver”