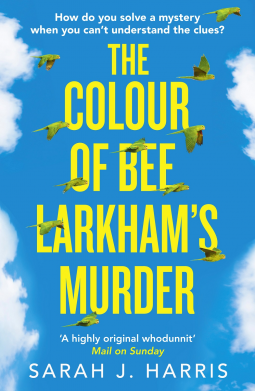 Similar to: The Curious Incident of the Dog in the Nighttime

Could be enjoyed by: Fans of quirky characters who don’t mind repetition

Jasper is a teenage boy being brought up by his Dad after the death of his Mum some years ago. He’s autistic and also has face blindness (literally doesn’t recognise anyone’s face, only their clothing/jewellery etc.) and synaesthesia (sees colours and patterns when he hears sounds i.e. a barking dog looks like it’s surrounded by yellow french fries). When free spirited Bee Larkham moves into Jasper’s street and starts playing loud “alien” music, disrupting the peace and causing Jasper to see shiny silver shapes, he’s intrigued. When he meets her and finds out that her “colour” is a rare shade of blue (just like his Mum’s) he’s excited. And when he talks to her about his beloved wild parakeets that nest in her tree and she actively encourages them, Jasper thinks he’s made a new best friend. So why is Bee Larkham missing, and why does Jasper think that he’s killed her?

As you can probably already tell, this is a highly original book. Jasper is a great, multi-dimensional character  – an unreliable narrator whose innocent view of the world puts a very different spin on the main narrative. On the other hand, Bee Larkham is a horrible, manipulative individual. She had a terrible childhood and I’d guess that she was mentally ill but she’s literally a paedophile. A lot of people seem to have glossed over this (perhaps because a woman having sex with an underage boy is somehow seen as not as bad as a man having sex with an underage girl?) but as far as I’m concerned abuse is abuse – and there’s a lot of it in the book. However, because of Jasper’s narration, it’s all wrapped up in a kind of cozy, childlike innocence that takes away from some of the horror – but works brilliantly to amplify it when something bad happens to him.

The main plot of the book is fairly straightforward, but with Jasper narrating the action you have to very carefully read between the lines to see what’s really going on. His inability to recognise faces (even those of his parent’s) adds another layer of complexity, although this makes the story somewhat hard to follow in places and the repetition of endless descriptions of colours did get a bit tedious. I also thought that the plot could have been a bit tighter – to me, the book felt overly long and there were some slack parts during the middle chapters where nothing really happened.

I enjoyed the juxtaposition of the light and shade within the novel – the overall tone was lighthearted and amusing despite the dark subject matter. Jasper was totally naive to the situation going on around him but there was just enough information for the reader to be able to guess at what was really happening. There were a few red herrings thrown in for good measure too, which kept me on my toes and meant that I didn’t even begin to guess at what the final conclusion might be.

Overall, I liked The Colour of Bee Larkham’s Murder for it’s charm, complexity and uniqueness but there were times when the writing got a bit tedious and I disengaged from the storyline. I liked the neurodiverse representation and felt that this really added to the intrigue but the novel felt overly long and I sometimes found it hard to follow who was who. It’s a shame because this could have been an absolutely brilliant read – it’s certainly a great idea – but unfortunately the author didn’t quite pull it off.

Three and a half “don’t eat that pie!”s out of five.

Quirky, funny but oh-so repetitive and slow in parts.

3 thoughts on “Review: The Colour of Bee Larkham’s Murder by Sarah J Harris”