Welcome to another edition of the Calendar Girls!

Calendar Girls was a monthly blog event created by Melanie at MNBernard Books and Flavia the Bibliophile and will now be hosted by Katie at Never Not Reading and Adrienne at Darque Dreamer Reads.  It is designed to ignite bookish discussions among readers and was inspired by the 1961 Neil Sedaka song Calendar Girl.

Just like the song, each month has a different theme. Each blogger picks their favourite book from the theme and on the first Monday of the month reveals their pick in a Calendar Girls post.

So without further ado, this month’s theme is…

…and my top pick is…

Behind Her Eyes by Sara Pinborough 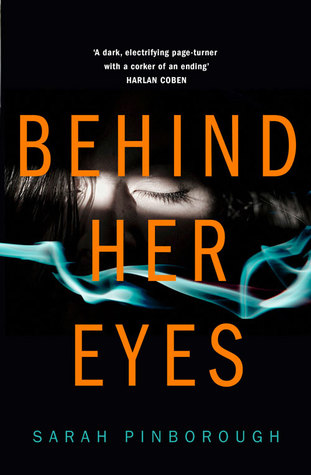 As soon as I saw the theme for this month’s Calendar Girls, I knew straightaway that there was one book whose surprise ending completely blew me away – and that was Behind Her Eyes. The publishers even started the hashtag #WTFthatending because so many people were talking about it!

The book is about a psychopathic wife, an edge-of-breakdown husband and a nice-but-slightly-dim friend/colleague who gets embroiled in their dysfunctional marriage. As we explore the web of lies that the couple have created, the nice-but-slightly-dim friend/colleague uncovers more and more of the truth until things eventually come to a head. However, instead of the expected showdown you get a completely left-field ending that’s so unnerving I’m still thinking about it two years later. Seriously, this is quite a long book and although it trails off a bit in the middle (the wife is mentally ill, we get it) it is so worth it to get to the ending. Trust me.

Although on paper the book does sound a bit like Gone Girl, there is nowhere near the level of creeping tension where each scene in the book is relevant, the next scene builds upon it and everything is tied up in a neat bow at the end. This is more like you have a fair idea that the wife is psychopathic, you’re not sure about the husband, you uncover bits of the past and have an idea of what’s going on and then out of nowhere comes the ending.

There were a couple of weird ideas introduced in the novel that I initially struggled to get to grips with (lucid dreaming anyone?) but after reading the whole book I think the concept actually worked really well – even if it did seem a little incongruous at first.

Minor negatives aside, Behind Her Eyes is a fabulous read and thoroughly deserves all the buzz that was created – WTF that ending indeed!!!

Have you read Behind Her Eyes? Do you enjoy books with twists that you don’t see coming? Let me know in the comments!