Gosh, I’ve just been flicking through my blog posts from this year and I can’t believe how fast 2018 has gone! I started the year not being particularly serious about blogging, with about 150 followers and no other social media presence. I’m ending the year with over 350 followers, 240 Twitter followers and a far more regular blogging schedule, plus more varied content and participation in the wider blogging community. Oh, and I’m finally writing my posts on a laptop instead of tapping everything out with one finger on my Kindle Fire! I can actually resize images!

I also bought myself this nifty little trolley from Ikea and turned it into a Book Blogging trolley (which the good people of Twitter seemed to really like). I love it so much! 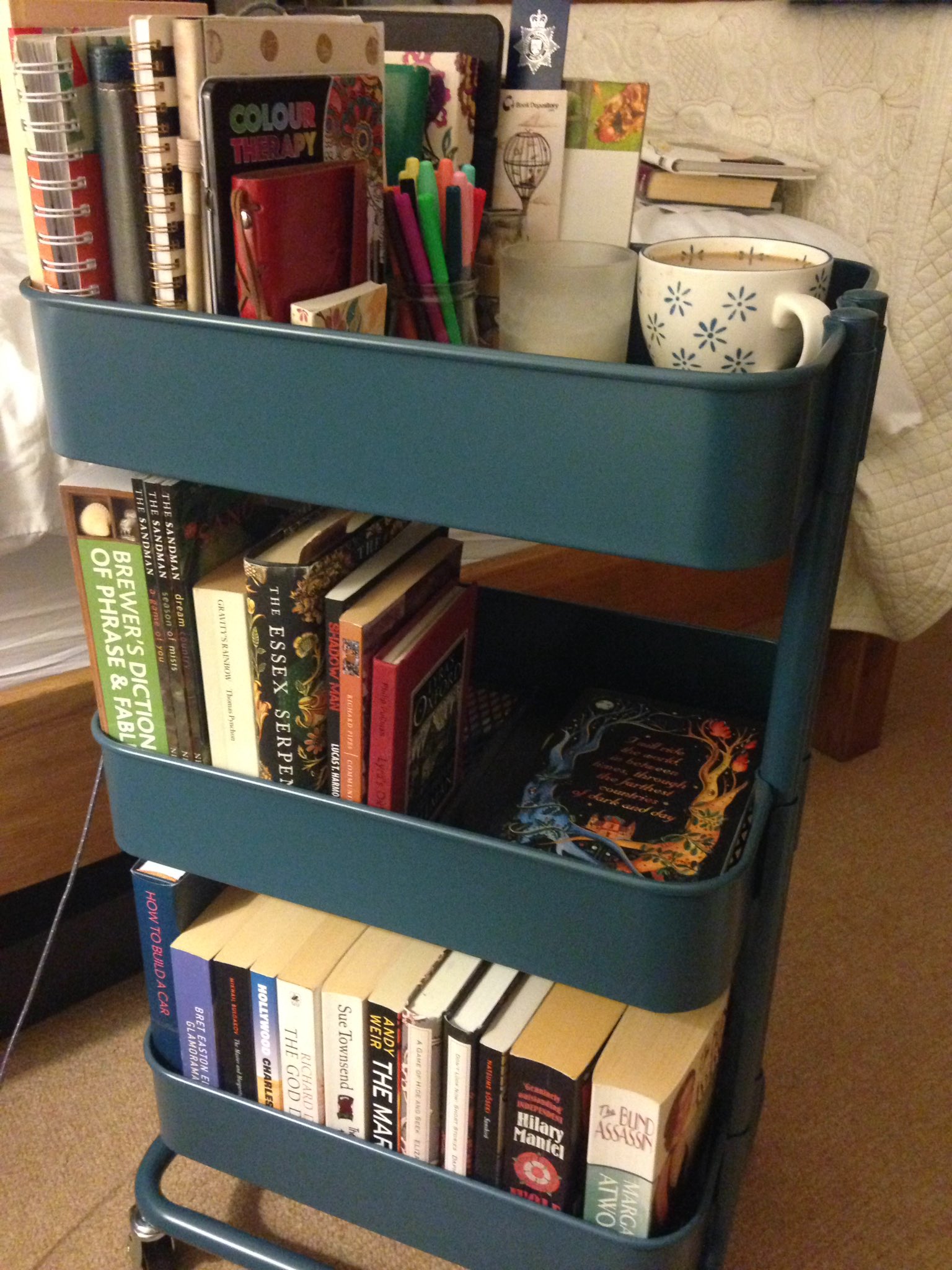 In terms of reading, I’ve read and reviewed 62 books on my blog this year and had several rated five out of five. I was actually surprised at how many poorly rated books I read – something that I’m planning to change in 2019. No more Foxhole Court! I was also surprised at how few books I’d read – I think reading Les Miserables took up quite a lot of time and should count for at least five!

I’ve already talked about my favourite books that I read as part of the Read Harder challenge but I’ve got a few other honourable mentions from my reading total:

The Yellow Wallpaper by Charlotte Perkins Gilman was a wonderful novella with layers of symbolism that I found completely enthralling.

Bitter by Francesca Jakobi was a fantastic, twisted book about what happens when a mother’s love becomes obsessive. I was totally engrossed from start to finish by this clever, atmospheric novel.

Convenience Store Woman by Sayaka Murata was wonderful. I loved the sheer weirdness of this short book – again, the novella was completely multi-layered, packing a huge amount into what initially appears to be a simple story about a woman happy to work in a simple job in a convenience store.

The Lido by Libby Page was a lovely book that feature a rare appearance from a main character who was actually older than sixty! I loved the relationship between the characters and seeing how the community all came together was lovely. It also made me want to take up swimming again!

However, there was one other book that really stood out for me this year that I’m officially naming as my favourite…

It was Skyward by Brandon Sanderson!

I loved everything about this amazing novel, from the female representation to the complex characters, the world building and the TOTAL LACK OF TEENAGE SNOGGING! Amazing!

I hope you all had a great 2018 too! What were your favourite reads? Let me know in the comments!

As you may know, every year I take part in the Read Harder Challenge by Book Riot and as I’ve just completed it for 2018, I thought I’d share my thoughts. I bang on a lot about this scheme but it really is one of the best ways that I’ve found to expand my reading horizons. If you’re not signed up to Read Harder 2019, what are you even doing with your life? Get involved!

Read Harder consists of 24 categories and you simply read a book that fits into the given parameters. Some are easy  (a book with a cover that you hate – loads of those around!) and some are really difficult (an essay anthology, a Western etc.). Here’s the full 2018 list with links to my choices:

Out of this fairly random assortment of books, five really stood out. In no particular order, they were:

The Diary of a Young Girl by Anne Frank

Anne’s diary detailed her life in hiding during the Second World War from the Nazis. It wasn’t what I expected but I found it completely engaging and terribly affecting.

This under-the-radar book had me completely spellbound from the first page to the last. It’s the true story of the theft of several highly valuable bird specimens from a museum and leads to the bizzare world of competitive fishing fly tying, organised crime and orchestral music. Unexpectedly brilliant, if you come across this book I’d urge you to read it.

The Handmaid’s Tale by Margaret Atwood

The story of a dystopian future where women are kept in servitude, this felt weirdly prescient for a book published in the 80’s. I loved it.

Another under-the-radar book, this novella had me completely addicted. It’s the very simple story of a lesbian relationship but it’s beautifully written and utterly compelling.

The Woman in the Window by A.J. Flynn

I loved everything about this domestic noir thriller, from the characterisation to the plot twists to the dark, Hitchcock-esque atmosphere. Fantastic.

Every year, Read Harder throws up some brilliant books that I wouldn’t have otherwise read and this year has been no exception. I think that overall, the two books that really left a lasting impression on me were The Diary of a Young Girl by Anne Frank and Not That Bad ed. by Roxane Gay. Both were really powerful own voices novels of women struggling through adversity and both have haunted me ever since reading them.

The books that really surprised me were The Feather Thief by Kirk Wallace Johnson for it’s portrayal of a strange little world that I knew nothing about; The Lido by Libby Page which I’d assumed would be fluffy chick lit but turned out to be a very moving portrayal of lonliness, grief, ageing and community; Women by Chloe Caldwell which was a tiny little novella that massively drew me in to the portrayal of a relationship between two women and Tetris by Box Brown which was a fascinating story of the history of the game Tetris told in graphic novel form. All of these books looked like they weren’t really my thing but they all completely surpassed my expectations.

The books that I achieved the most satisfaction from reading were 1Q84 Book Three by Haruki Murakami and Les Miserables by Victor Hugo. Both were long, complicated tales that took dedication to get through but they were both utterly worth it.

The funniest book that I read was My Life and Other Unfinished Business by the legend that is Dolly Parton. The woman is an untapped well of positivity and compassion and her life story is incredible (at one point she gets abducted by aliens – it gets mentioned almost as a footnote on one single page. That’s how jam packed her life has been).

I was introduced to a completely new genre with Tetris by Box Brown and The Kite Runner graphic novel by Khaled Hosseini. Graphic novels have really expanded from their comic book origins and they’re definitely a genre that I’d like to read more from. In saying that, Giant Days by John Allison was a more traditional comic and that was amazing too!

Did you take part in the Read Harder Challenge this year? What were the best books that you read? Let me know in the comments!