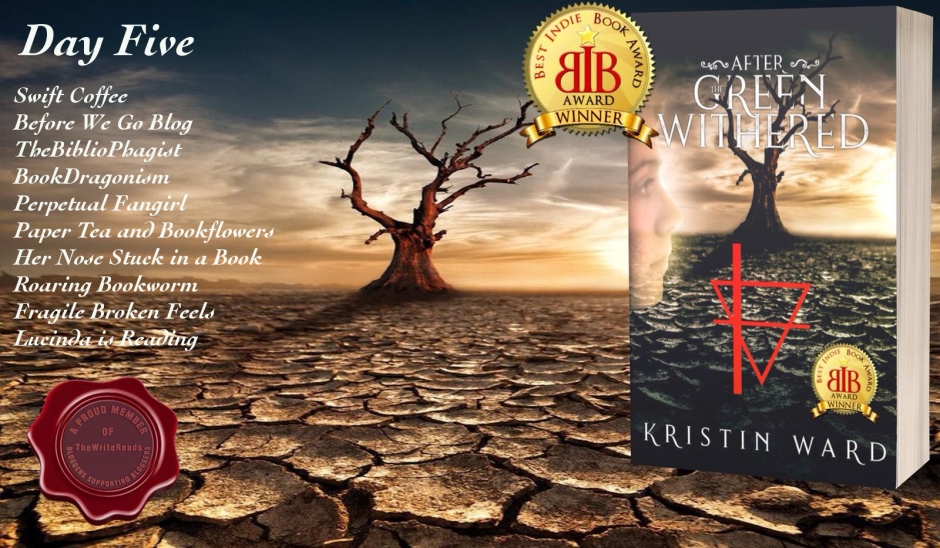 Similar to: It had something of a Hunger Games feel

Could be enjoyed by: Fans of environmental disaster dystopias 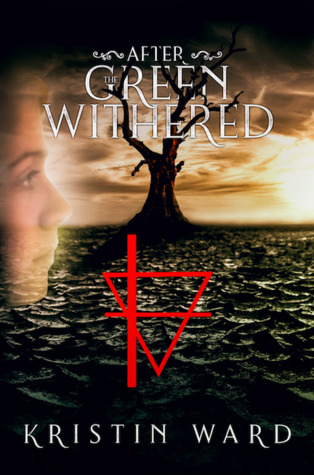 “They tell me the country looked different back then.

They talk of open borders and flowing rivers.

They say the world was green.

But drought swept across the globe and the United States of the past disappeared under a burning sky.”

After The Green Withered begins like a hellish version of Silent Spring by Rachel Carson – except instead of warning about the potential devastation of our planet, the worst has already happened. Enora lives in a world post-climate change; a world where the relentless heat has caused desertification of the land and salinization of the oceans. Water is now the global currency and is severely rationed by the shady controllers of this fundamental resource – the DMC. Enora is shocked when she’s picked to join their elite ranks but when the true nature of her “Pathfinder” role becomes clear, she is forced to confront a painful reality. Who are the DMC? What are their true aims? And why do they need Enora?

I have to begin by saying that I’m so glad that I actually enjoyed this book. I am notorious for moaning about how much I don’t like YA fiction but I’m pleased to say that although the characters in the novel were teenagers, the overall tone was fairly grown up. There were some scenes later on in the novel that were quite upsetting so it’s definitely not a book for younger readers.

I loved how the scene was set in the first chapter regarding the state that the world was in. Yes, it was a bit of an info-dump but it was a powerful summary of everything that could (and probably will) go wrong if we continue to ignore climate change. The fact that the world-building was rooted in actual science made it hit home even harder.

The writing was good, even though I felt like the pacing was a little off in places. Some parts were a tiny bit slow, whereas others were heart-in-your-mouth exhilarating. However, I did like how easily I was able to visualise even the most complex, technical parts of the novel, such as Enora’s Pathfinder display or the kit that she used.

I liked Enora as a character but felt a little ambivalent towards some of her male counterparts – a couple of them popped up so infrequently that I struggled to emotionally connect with them. There’s clearly something fishy going on with every single one of them, so hopefully the next book will allow readers to get to know them better.

The book finishes on a total cliff-hanger and I have SOOOO many theories as to what happens next but I’ll keep them to myself for now. I’m absolutely dying to know though!

Overall, I thought that After the Green Withered was a good debut – really thought-provoking and engaging. I had a few issues with pacing and character development but I think that it’s a great set up for the second book in the series. I liked the overall theme of climate change and I hope that it might make people think more seriously about what action we need to take right now to prevent this awful world from becoming our future.

Three and a half  “OMG I think I know what happens next!?!”s out of five.

Well written and scarily prescient. A good debut with a fantastic message!

Please note that I read this book for free in exchange for an honest review courtesy of  The Write Reads blog tour. Thank you to Kirsten for giving me a copy of her novel and to Dave for putting the tour together! 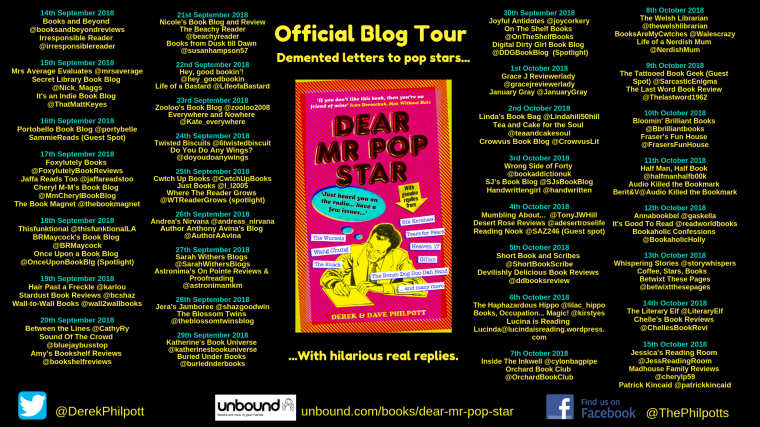 I’m really excited to be taking part in my first ever blog tour 😀, so thank you very much to Derek and Dave Philpott for the opportunity and for giving me a copy of their new book, Dear Mr. Pop Star, in exchange for an honest review.

“For more than a decade, Derek Philpott and his son, Dave, have been writing to pop stars from the 1960’s to the 90’s to take issue with the lyrics of some of their best-known songs. But then, to their great surprise, the pop stars started writing back…”

Things you should know about me before reading this review: I’m a huge fan of music from the 1980’s and 90’s, especially anything indie/alternative/new wave/synth pop/new romantic. I’m also a big fan of a comedy letter, especially if there’s some kind of critique or complaint involved. So when I heard about this book (that makes me sound like I have my finger on the pulse – in reality Dave emailed me directly) I was really looking forwards to reading it.

I loved the mock outrage humour contained within the letters, the nitpicking nature of the authors and the cleverly constructed observations about somewhat forgotten song lyrics. I really enjoyed how the songs often weren’t explicitly named so it was left up to the reader to trawl through their memory banks (or perhaps Google) to ascertain exactly which lyrics were being referred to – often reference would be made to several songs in the same letter so you really needed to dig deep to fully appreciate all of the puns being made. The humour was frequently very subtle (and very English) which sometimes made me pause before I comprehended the joke:

I liked how the authors had structured the book with shorter observations (one-liners, if you will), many of which were absolutely hilarious and worked well to break up the longer letters and responses.

“Dear Ms. Carlisle, are you sure you don’t mean Devon?”

The longer letters themselves were very funny and very clever – sometimes using puns based on the band name or titles of their biggest hits or sometimes referencing one song in a farcical manner e.g. Dear Devo Re: Whippet was a letter about dog racing. What surprised me was the number of responses gained and the willingness of the respondents to play along. There must have been thousands of letters sent in order for Derek and Dave to have received the hundred or so responses that are published in Dear Mr. Pop Star and the sheer amount of effort and dedication earns them a gold star from me.

I really enjoyed the sense of nostalgia that I got from reading this book. Many of the songs referenced were *ahem* of a certain vintage but some of the wider pop culture references were too. I was excited to see that the hit medical drama “Angels” got a mention – my cousin Darren used to be in that! He played the gormless ginger kid who frequently looked at the camera and got sacked after a few episodes. See Philpotts, you’re not the only ones who have links to the glittering world of celebrity!

Overall, I thoroughly enjoyed reading Dear Mr. Pop Star and would highly recommend reading it little and often – perhaps as a coffee table (or dare I say it – downstairs loo) book. It would also make a great present for that hard to buy for music lover.

Rating: Four “is that really what EMF stands for? Unbelievable!” out of five.

If you want to find out more about the Philpotts (I mean, why wouldn’t you) you can find Derek on Twitter @DerekPhilpott or via Facebook. More info about Dear Mr. Pop Star can be found on Goodreads and Unbound and the book can be purchased via Amazon.