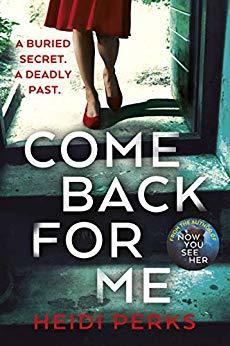 Similar to: Now You See Her, The Girl on the Train… all the usual suspects

Could be enjoyed by: Thriller fans – this is definitely a good example of the genre

COME BACK FOR ME, out in eBook on 1st June and hardback on 11th July #COMEBACKFORME

I feel like I need to start this review with an apology – I received an email giving me super early access to read this book AGES ago and I’ve only just got round to writing the review. Luckily I’ve just about managed to beat the publishing date soooo…. yay? Ooops? Not really sure. Anyway, life has taken over a bit from the blog recently so I’m sorry that I’ve not been around much and I’m sorry that it’s taken me until now to write this review – especially as I really enjoyed Come Back For Me.

Grovel over… on to the review!

Stella grew up on a tiny island just off the British mainland and had a seemingly idyllic childhood – think The Famous Five but without the racism. Then one day – completely out of the blue – her Dad decides that they all have to leave, despite the huge storm that makes it totally unsafe to travel. Despite the fact that the family survive the ferry crossing to the mainland, they’re oddly changed by their move. Stella’s parents split up, her brother moves away and severs contact, her mother dies. She has no idea what happened and longs for her picture perfect childhood home. Then one day she spots her old house on the news – it seems that a body has been found buried in the garden. Stella is both horrified and intrigued and as she struggles to understand the implications of the discovery, she realises that it’s not just human remains that have been uncovered – it’s a web of family secrets too.

I really love the way that Heidi Perks writes. Her descriptions of the island and it’s inhabitants were brilliant and I could see the kind of utopia that she’d created – all children doing wholesome activities like climbing trees whilst their mothers baked bread and hung out the washing. There was a real risk that her setting could have felt too old-fashioned for the 1990’s but it was just the right side of modern but cozy.

The family exodus takes places in the first chapter and my heart was absolutely in my mouth. The writing was so tight and the situation so dangerous that it really kicked things off with a bang. It opened up numerous possibilities for the reasons behind the family needing to urgently leave and I loved how I was immediately drawn into the novel, inventing my own theories as to what had happened straight away.

As the book progressed, the tension built brilliantly and there was a good number of red herrings thrown in to the twisty turny plot that kept me constantly re-evaluating what I thought I knew. I loved the way that island setting slowly moved away being safe and secure to being smotheringly claustrophobic once secrets started to be revealed. I actually struggled to put the book down, so much so that I put off doing some major household tasks so that I could sneakily finish it off. Sorry bathroom ceiling, you’ll have to wait for that final coat of paint!

Overall, I really enjoyed reading Come Back for Me and thought that it was a thoroughly engaging read. My only issue with the novel was with the name of the island – Evergreen. Guess what I was singing in my head every time it was mentioned…

Really addictive, exciting and fast paced – a hard book to put down.

Please note that I read this book for free in exchange for an honest review courtesy of NetGalley and Penguin Random House. Thanks to Natalia Cacciatore for giving me advanced access!

Similar to: Every other “domestic thriller” with a blue cover and yellow writing (why this combination?)

Could be enjoyed by: Fans of blue books with yellow titles

So it seems that domestic thrillers are fast becoming a guilty pleasure of mine. Yes, they’re genre so essentially follow a tried and tested formula but when they’re well written they’re utterly addictive – and luckily for me, Now You See Her is completely, totally unputdownable. In fact, I read it in one sitting (I say read – guiltily consumed it when I should have been working is more accurate). Therefore, I’m marking it as a bathtub book – as in, run a bath and be prepared not to move for the next three hours ☺.

The story focuses on Charlotte, a busy mum of three kids. Two weeks ago was the day of the school fete, when she agreed to look after her hyper-protective friend Harriet’s little girl along with her own children. Harriet’s daughter goes missing and Charlotte is beside herself – but is she actually guilty of negligence or is there something else going on? The book alternates between the events of two weeks ago, Harriet’s childhood and the present day and as it progresses we are slowly drip fed information about what has really happened. And seriously – a lot of shit has gone down.

I LOVED the way that Now You See Her was written. Heidi Perks did a fantastic job of writing such well-rounded, believable characters and built the tension up through the narrative brilliantly. I thought that the reactions of all of the characters was utterly believable and the sense of dread and panic was palpable. I also liked the way that the novel alternated between then and now – I’m not always a fan of a time slip but this one was easy to follow and didn’t require an idetic memory to establish whereabouts in the timeframe each chapter was taking place. In a lot of ways the book reminded me of a less complex Big Little Lies, but faster paced and with more drama. High praise indeed!

I really empathised with Charlotte’s character. She wasn’t perfect but she seemed very real – just an ordinary busy mum trying to keep all of her plates spinning. As the novel progressed and we found out more about Harriet she went from being a slightly annoying, one dimensional woman (the classic no-fun mum) to a complex, ambiguous individual with a disturbing past and an even more disturbing present. I really liked how the characters were played off against each other as it added to the drama and the twist at the end made me want to stand up and cheer.

I wasn’t a huge fan of the “now it’s a year later let’s see how everyone’s getting on” final chapter as it felt a bit flat after all of the drama – but that’s only a minor criticism.

Overall I thought that Now You See Her was a great novel – not hugely original but completely engrossing and would make a fab beach read.

A total page turner of a novel – a great holiday book. Just don’t start reading it if you have immediate plans.