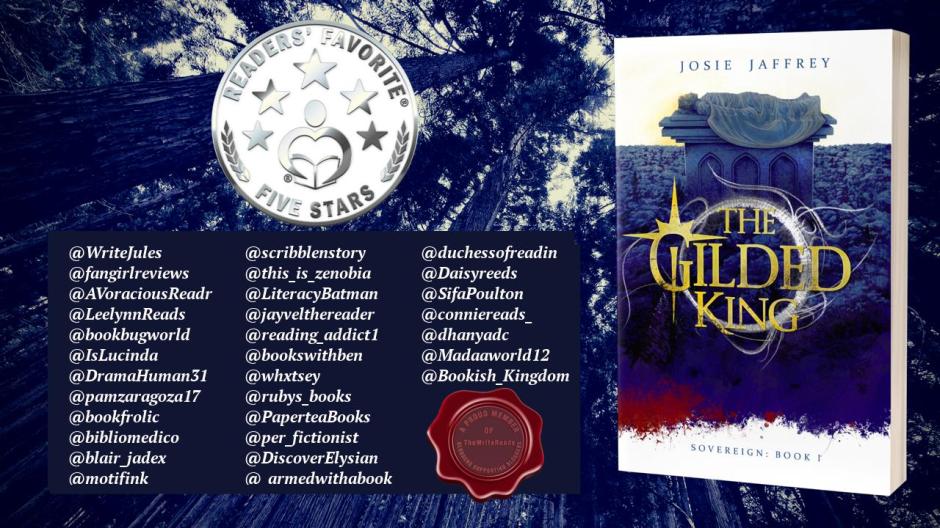 The Gilded King – Sovereign Book One

Could be enjoyed by: People who have read the prequel

Firstly, I’d like to say thanks to Dave and everyone in The Write Reads gang for all of the love and support and for including me on this tour. It’s been AAAGGGEEESSS since I’ve published anything on here so being  asked to participate in a blog tour has been a great way to get me back into the swing of things!

In the Blue, the world’s last city, all is not well. Julia is stuck within its walls. She serves the nobility from a distance until she meets Lucas, a boy who believes in fairytales that Julia’s world can’t accommodate. The Blue is her prison, not her castle, and she’d escape into the trees if she didn’t know that contamination and death awaited humanity outside. But not everyone in the Blue is human, and not everyone can be contained. Beyond the city’s boundaries, in the wild forests of the Red, Cameron has precious little humanity left to lose. As he searches for a lost queen, he finds an enemy rising that he thought long dead. An enemy that the humans have forgotten how to fight. One way or another, the walls of the Blue are coming down. The only question is what side you’ll be on when they do.

My initial reaction to this novel was “is this self published? Wow!” Now, I don’t mean to have a go at any of the excellent authors out there who have published their own amazing stories BUT The Gilded King feels… professional. It reads like it’s been edited by someone who isn’t a family friend. The narrative flowed well and I was soon hooked into the story. Most importantly… no typo’s.

Unfortunately, as I began to get deeper into the story, I started to get a little confused. I was expecting some kind of world building or backstory… anything to explain all the things going on like The Fall or the location of The Blue or the link between the vaccine, Silvers and the Weepers. However – nada. In fairness to the author, there is a prequel novella (which I haven’t read) which I guess would explain things in a bit more detail but as a stand alone novel I felt that there should have been more explanation. Plus, every time The Fall was mentioned I pictured this:

I quite liked all of the characters, even if Claudia was a bit wet and Cameron was often utterly clueless. There was some good, slow building m/m queer representation and I loved Felix – I think his character will really develop in book two. I liked Julia too and thought it was fantastic to have a self-described “plain” looking girl as the main heroine – what a refreshing change!

As far as the storyline went, I really got into the book and read it in only a couple of days. I have to say though, I did get a bit confused by the three different names for vampires, plus the elite vampire guard and I sometimes struggled to work out who the characters were and what side they were on.

Overall, I liked The Gilded King and now that I’ve got my head around the setting I think books two and three will be really interesting. The novel wasn’t without it’s faults but it was a good narrative  – I could just have done with reading the prequel novella beforehand!

Three and a half “they’re VAMPIRES???”s out of five.

Well written, exciting stuff from a genre that I don’t normally read. The scene is set nicely for book two!

Amazon US and Amazon UK

I live in Oxford, UK, with my husband and two cats (Sparky and Gussie), who graciously permit human cohabitation in return for regular feeding and cuddles. The resulting cat fluff makes it difficult for me to wear black, which is largely why I gave up being a goth. Although the cats are definitely worth it, I still miss my old wardrobe.

Please note that I read this book for free in exchange for an honest review courtesy of The Write Reads. Thanks Dave!