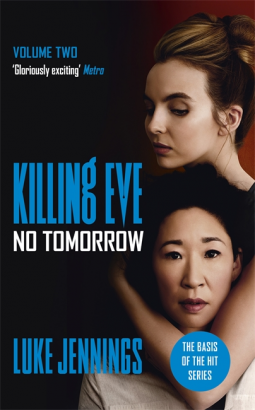 Similar to: Something by John Le Carre or Ian Fleming

Could be enjoyed by: People who liked book one

No, you haven’t read this review before – this is the second instalment of the novels that the Killing Eve TV show was based on. To be honest, by the time I’d finished this book the show had deviated so utterly from the text that I wasn’t even sure if it had taken the book into account, was going to do so in the next series or if Pheobe Waller Bridge was just forging ahead with her own storylines from now on. I guess we’ll just have to wait and see.

In No Tomorrow, the main characters remain as in the first book; Eve Polastri (MI6 agent) and Oxana Vorontsova (Villanelle, sociopath and assassin). The two women are locked in a deadly game of cat and mouse, with Eve edging ever closer to Villanelle and the secretive organisation that she works for – only to find out the extent to which she’s been manipulated.

I’ll start with a nice positive – this book was far more coherent than the first one (Codename: Villanelle). The whole narrative flowed better, there was more content, the characters were more fleshed out. I mean, it’s still an overtly glamourous, ridiculously premised spy thriller so it’s never going to win any literary awards but it’s also super fast paced, exciting voyerism. You just have to remember to suspend your belief from time to time.

It was also nice to see a few glimpses of the humour of the TV series but unfortunately it was nowhere near as frequent or as well done. I thought that was such a shame because the TV series really does stand out for it’s quick wit and black humour. However, the book still retains a certain charm and is definitely a page turner. The characters are just as far fetched as ever but the way that Villanelle and Eve are drawn to each other is unique and even a tiny bit sexy. I mean, Eve still has stratospheric leaps of imagination (her instinct, ha! That must be why she’s female) and Villanelle survives some frankly bonkers murder scenes (spoiler alert: a leather suitcase does not provide much protection from a bomb blast) but the dynamic between the two women is fascinating.

It did find it annoying that I couldn’t for the life of me work out where the book was in relation to the TV series. Like AT ALL. Some events didn’t happen, others were alluded to, some were fairly similar but meant that things that had happened in the TV series didn’t make sense. It doesn’t help that a few of the male characters in the book have been changed to women for the television. Don’t get me wrong, I’m all for diverse representation but it doesn’t make it easy when you’re reading ahead to find out what happens and you can’t even figure out who is who!

Overall, I enjoyed No Tomorrow a lot more than Codename: Villanelle and I’m looking forwards to seeing what happens next, both in text and on the television. I still prefer the TV series but the final chapter of No Tomorrow has set up a really interesting premise that I’m super excited about. I need to know what happens!

Rating: Four “don’t eat the banana if it’s got human remains on it” out of five.